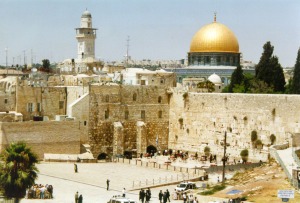 My first Yom Kippur service as a newly converted Jew was delayed by two hours because a pipe bomb was found under the front steps of my synagogue. Seeing the emergency vehicles and hearing of the bomb, my immediate response, instead of fear or angst, was a profound feeling of confirmation that I had come to the right place, that I had joined the right people.

I wanted to learn how to live ethically and courageously as a sometimes hated minority.  I was a lesbian looking for a religion that could teach me how to survive hatred, bigotry and even violence with integrity, compassion, and respect.  The bomb confirmed, with visceral authenticity, Jews were the people who survived inconceivable levels of pervasive hatred, and Judaism was the religion that helped them to do it.

I had already encountered my first bomb several years earlier.  A smoking grenade-like object had been thrown through the window of the Full Moon Cafe, a women’s coffeehouse in San Francisco.  I was eating a  tofu, sprouts and avocado sandwich (I remember clearly that it was a good sandwich, but with way too many sprouts) and listening to an acoustical guitarist when I heard the shattering of glass.  Something round and black landed across the cafe from me and, in the next second, a woman grabbed her leather jacket and leapt on the bomb, covering it with her body.

It turned out to be ‘just’ a stink bomb, though the woman who leapt had no way of knowing that.  When it didn’t explode she wrapped it in her jacket and ran it outside.  I finished my sandwich and tipped the musician.  It was a day in the life.  No one made much of a deal over it.  A few months later, a teen was arrested for going “fag hunting” as he called it, killing two gay men and wounding others.  His father was quoted in the newspaper as saying he was not sorry his boy killed those fags, though he was sorry his son got caught.  That was another day in the life.  (Two years ago something similar happened, but in Tel Aviv.)

And ten years later, this was my pipe bomb Yom Kippur.  It made me feel at home.  The police took it away and gave the all clear.  We entered the synagogue and prayed the Yom Kippur liturgy beginning to end.  And when we came to the point in the machzor where we recite “who will live and who will die,” so many people cried.  It was huge and good and cathartic.  I cried for the pipe bomb and the stink bomb and for so many other injuries and attacks.  I was home dealing with pain with other people dealing with pain.  Afterwards we broke fast together with bagels and 7 different kinds of herring (none of which I could eat) and we returned to our lives able to make that return.

And I continued to learn.

And, God forgive us all, I have learned enough to pray for the safety of my brothers and sisters in the Pride March this Thursday in Jerusalem.  There has been terrible violence, Jews against Jews.  Pray that often-hated minorities learn to stop hating.  Ourselves and each other.

Pray for peace in Jerusalem.

Holy Moriah is About

About Rabbi Dawn Rose and this site